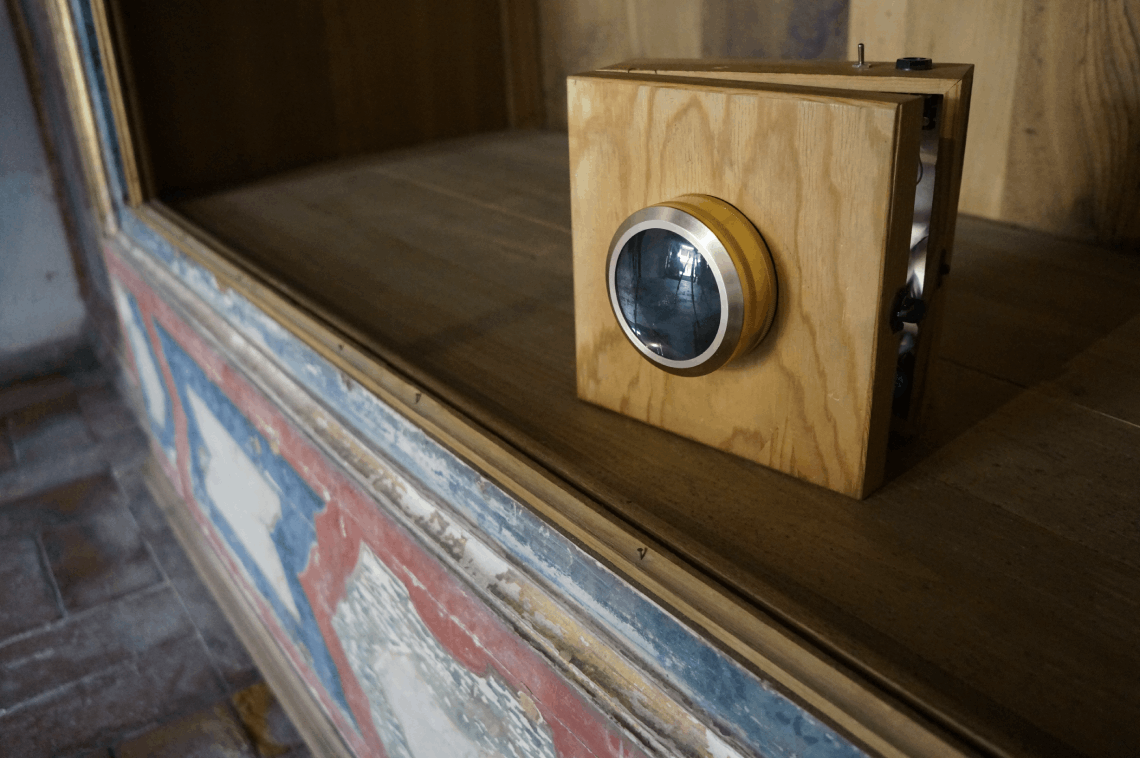 The light is different here, but so are the sounds, and the birds sing almost all the time. Freshly arrived from equinoctial America —more precisely from Medellín, Colombia— the atmospherical shift alters my circadian rhythms: the days are longer at this time of the year. It definitely feels good to be here, on this side of the planet, facing the Atlantic.

Sound artist and researcher on subjects such as spatial imaginaries and museological innovation, Jorge Barco works at MAMM —the Museum of Modern Art of Medellín— as curator of sound and electronic arts. Although the main goal of his presence at VIC was to present his installation Tiempos del Ruido at Aveiro’s arts and technology festival Criatek, Jorge describes his 20 days residency as an “intense and dilated timeframe”, which allowed him to amplify and transmit his noise further onto other locations around Portugal. 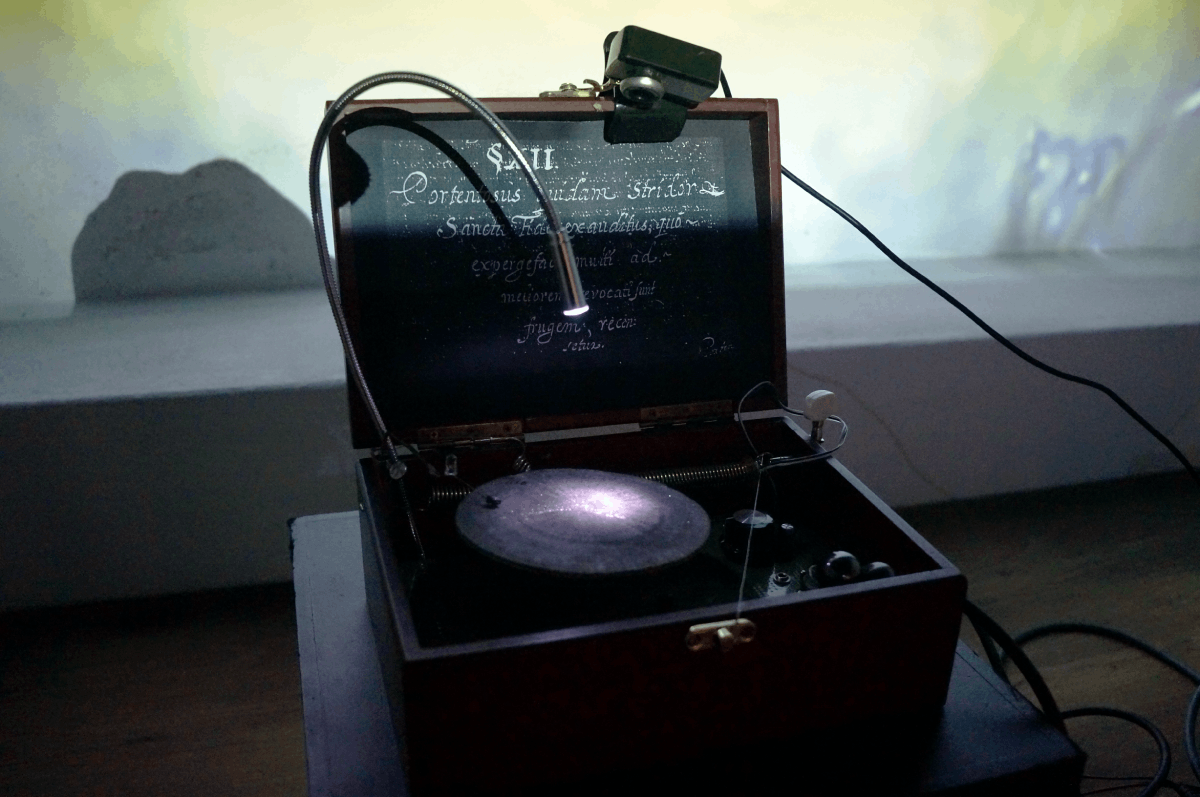 The center is simultaneously everywhere and nowhere, and the Aveiro Arts House has everything for Art to happen. From the basement of this house —and irradiating onto the whole building— the memory of Vasco Branco seems to keep shouting “Avant-garde!”

The Brotherhood of the Sonic Apocalypse

His participation in the 7th edition of the underground festival Aveiroshima2027, which took place just a couple of days after his arrival, was already a sign of the times to come, a kind of “introduction to Portugal’s Brotherhood of the Sonic Apocalypse”. Colombian artist Andrés Jurado —who accompanied him throughout the rest of his journey— promptly calibrated his 16mm movie projector in order to establish a deep communication with Barco’s Maquinas Mestizas (hybrid machines) at the venue known as GrETUA —the Experimental Theatre Group from the University of Aveiro— where the event took place.

To share my work with such impressive Portuguese performative and musical projects immediately gave me a sense of what is going on here: a true moment of hypnosis and ritual through the manipulation of body and sound. 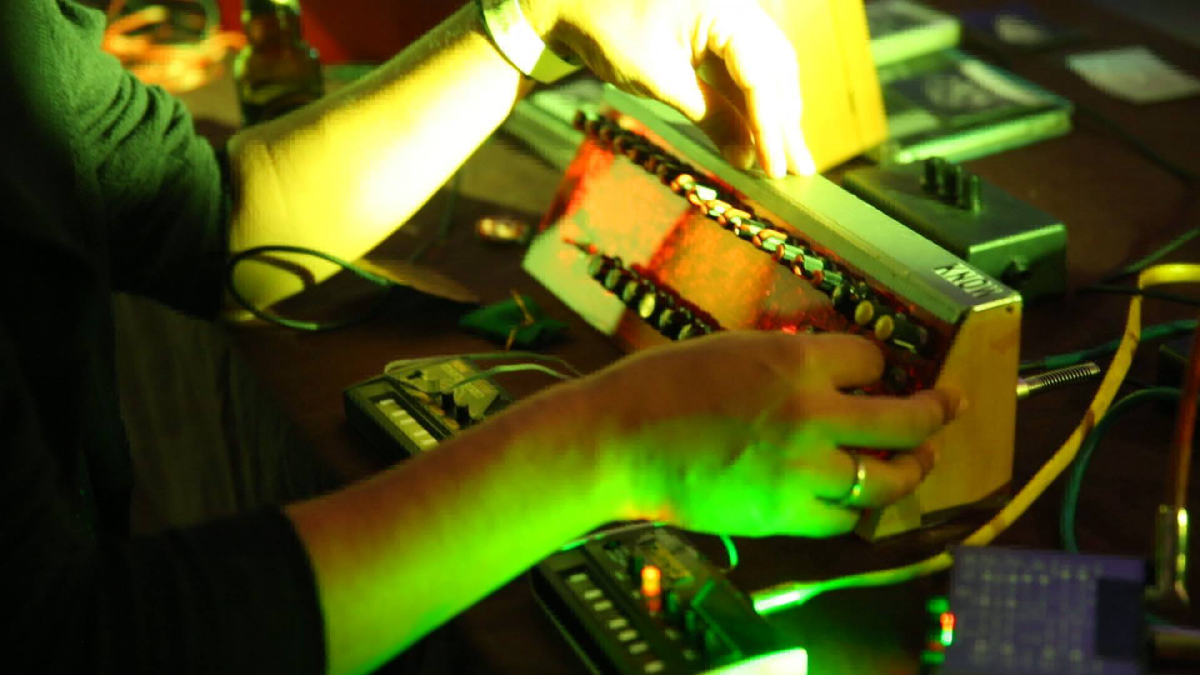 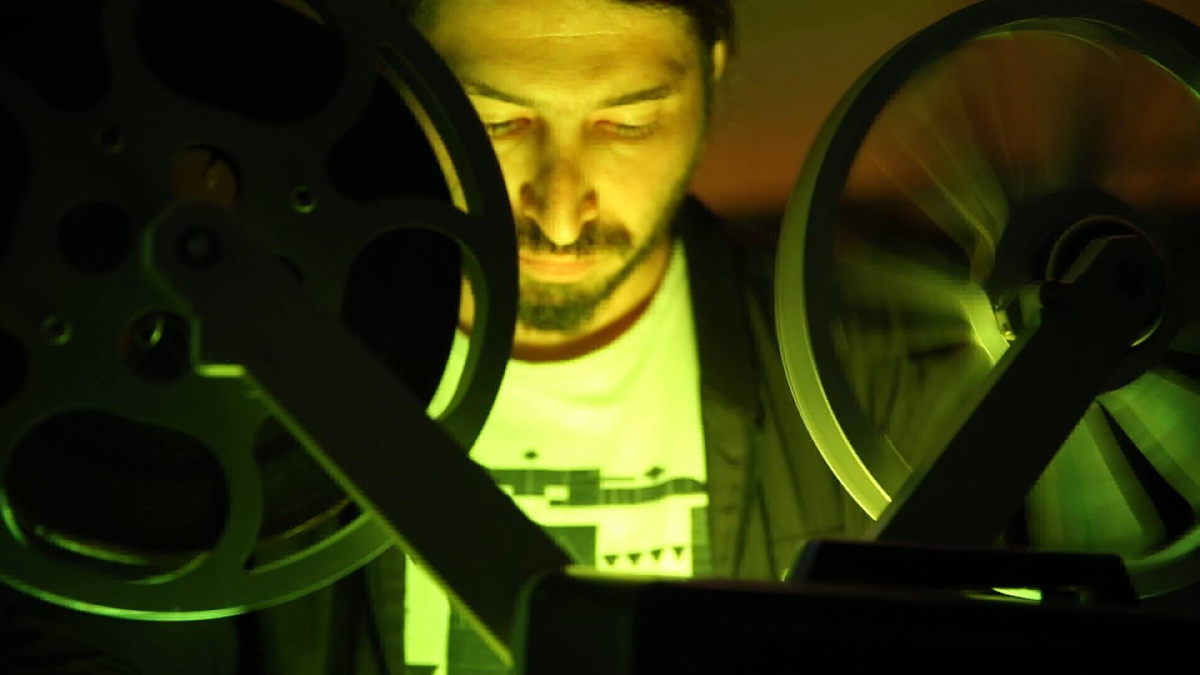 Barco and Jurado’s notable presence at Aveiroshima2027 was followed by a presentation at Desterro, in Lisbon, “that underground attic where the machines speak by themselves”. Invited by Boris, from Associação Terapêutica do Ruído, the two Colombian artists submerged into an intense sound therapy that combined ambient sounds and distorted voices with the crackling of stones and hot celluloid.

The next step was a presentation at Sonoscopia, in Porto. Invited by Gustavo Costa, Barco was proud to be the first Colombian artist to perform at the venue, which has been shaking Porto’s sonic scene for over 10 years, and which Barco considers to resound as one of the most exceptional places amongst the European sound art circuit, both due to its curatorial approach and to its fraternal and experimental spirit: a true space for making.

I spent two nights in Sonoscopia with Andrés Jurado and Juan Sorrentino, an Argentinian artist who was also in residence at VIC, and who would become my psychoanalyst for the season and a dear friend. We drifted around Porto and got to know the current nightscape, at interesting venues such as Maus Hábitos.

Borralha: fragments of another planet

Back to Aveiro, we invited Barco and Sorrentino to take a quick field trip up North. Our mission was to make contact with the otherworldly landscape and atmosphere of Borralha’s Wolfram mines, in the municipality of Montalegre. The history of Borralha is connected to the great world wars, as thousands of miners once extracted tungsten —also known as black gold— to feed the military machinery. 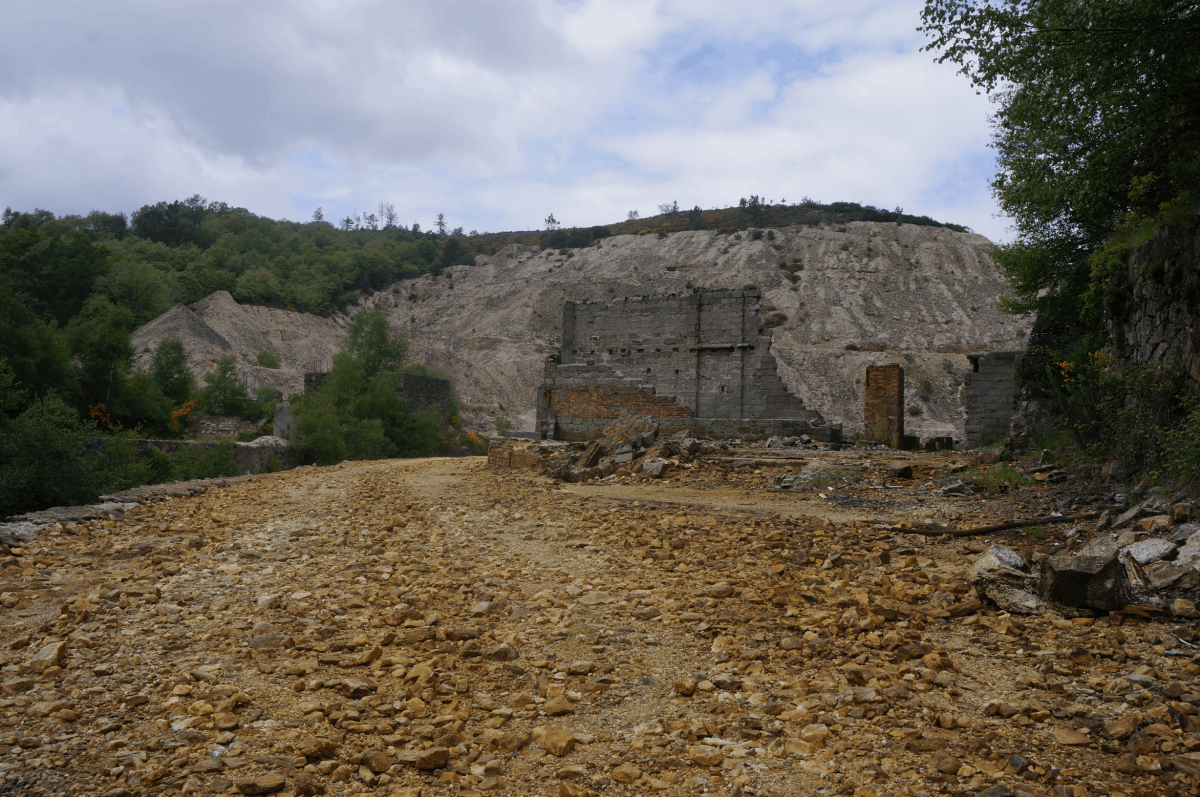 Borralha seemed like a fragment of another planet, right there in the North of Portugal, where the ruins harmoniously intertwine with nature. From these ruins now emerges an eco-museum, filled with unique stories about this strange and beautiful piece of land.

In that first approach to this extraterrestrial landscape, besides inhabiting it with sound and some land art gestures, exploring its minerals and collecting some elements for the works that Barco would develop for the Criatek festival, we sat down with Sofia, the eco-museum director, to establish the foundations of a future project in which we hope to combine museology, contemporary art, exploration of territory and promotion of natural and cultural heritage. 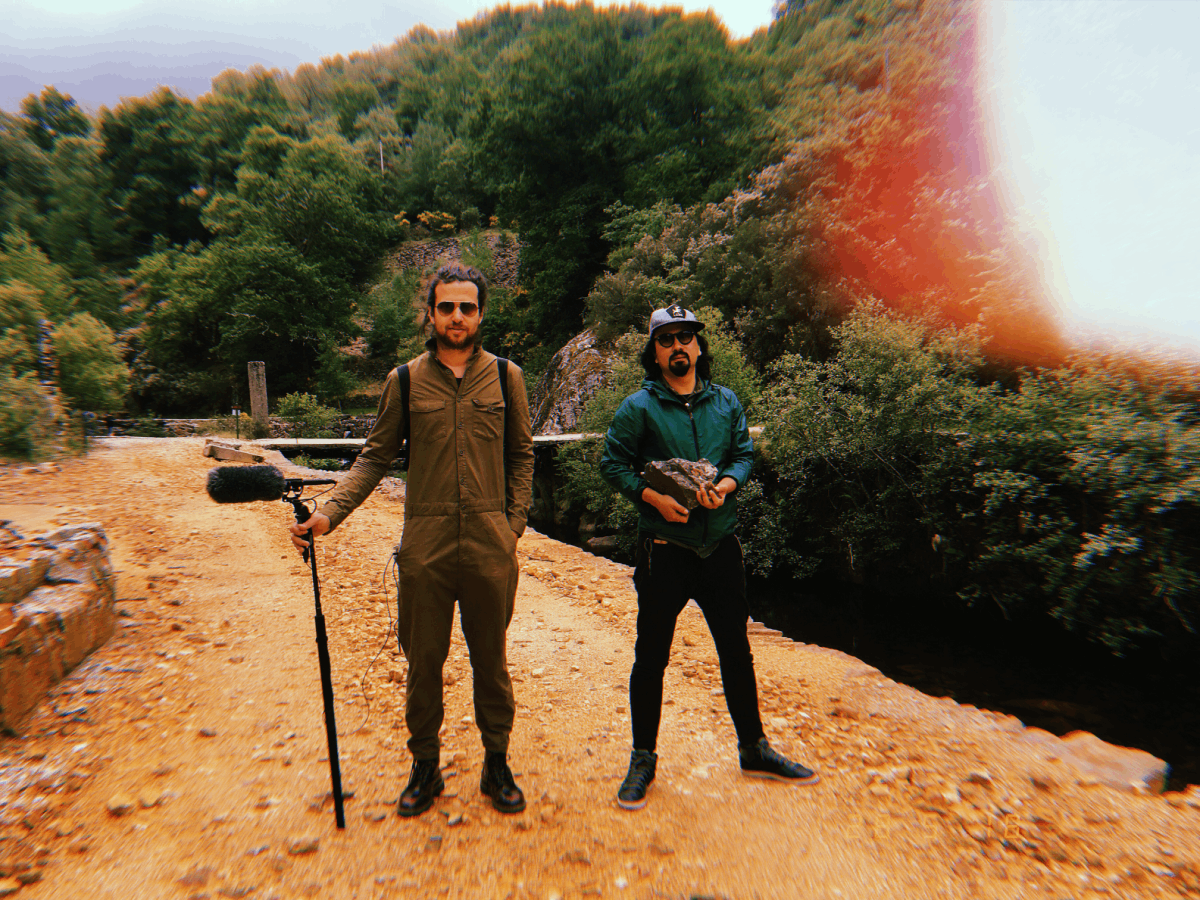 We actually never left the Aveiro Arts House, since this was our base of operations during the whole residency. Unknown to many, Aveiro seems to be one of the best kept jewels of Portugal.

In Aveiro, Jorge Barco found what he believed to be a quite spirited emerging arts scene. Spaces like GrETUA, Bau Uau, VIC, the city’s theatres, museums and public spaces —including the canals— seemed remarkably favourable for creation. In VIC, he encountered solid foundations, such as its library and film archive, its ceramics gallery or the underground auditorium, which acted as an opposition platform during the Portuguese dictatorship .

According to Barco, if the basement of the house is itself a treasure that demands deep research —while invoking the very history of Portugal in the second half of the 20th century— the several typologies of spaces available on the four upper floors —bedrooms, terraces, kitchens, shared workspaces…— convert the Aveiro Arts House into a “serious production machine”. 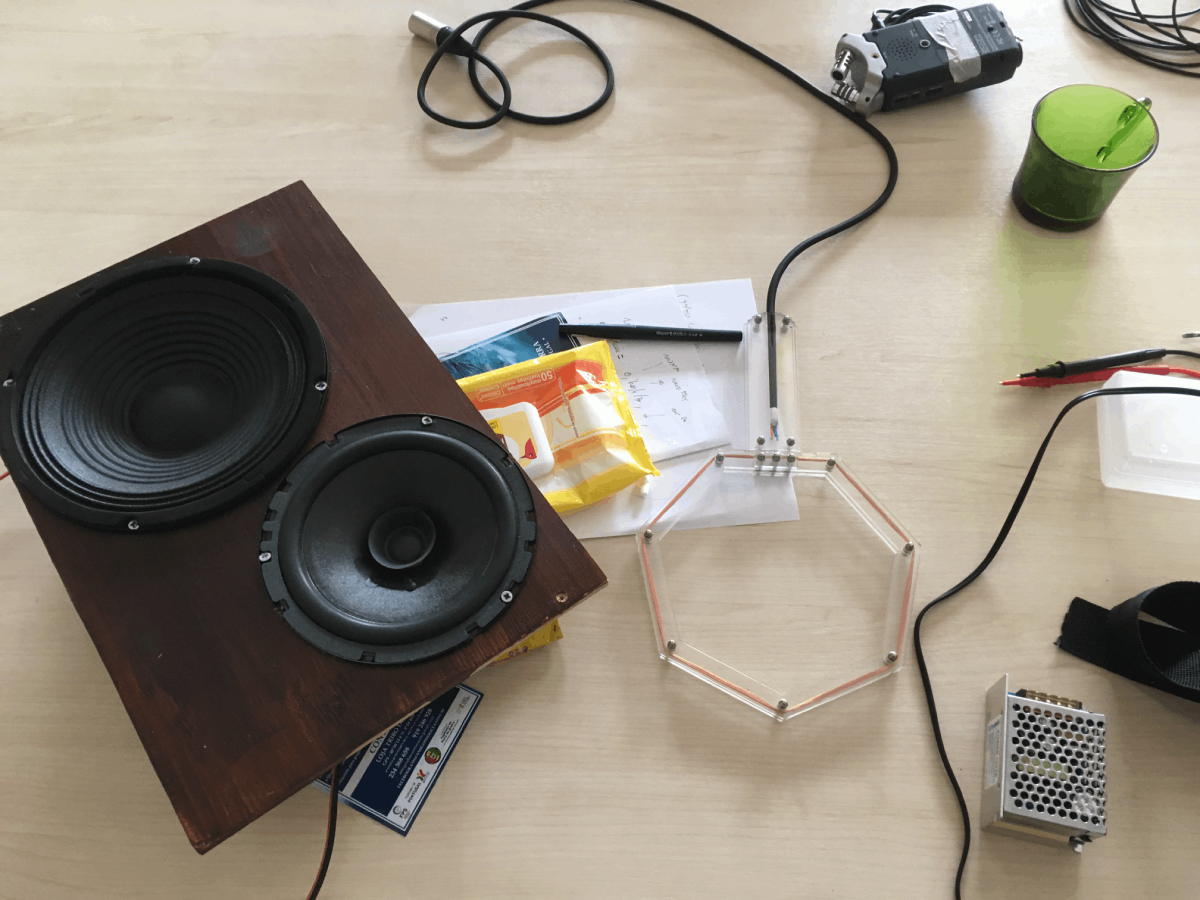 There’s a lot of material at VIC to make art but, moreover, to make your life itself an artwork.

Barco tells us that the residency was a really intense process for him and that he only wishes he had the time to absorb that much information and, moreover, that much affection: “electromagnetism, rocks, rivers, beaches, noise, walks, a pause to smoke a cigarette, the entropy of the periphery, the coffee, the desserts: a spaceship from where one can clearly devise the remnant universe.”

With the current expansion of the electronic arts during the last decade —while museums, galleries, cultural centres and independent spaces embraced the languages of new media— Jorge Barco was not surprised by the fact that in Portugal, where there were already quite a few interesting initiatives concerning video-art, sound art and other contemporary practices, a festival such as Criatek —which combines arts and science— would emerge from a town like Aveiro. 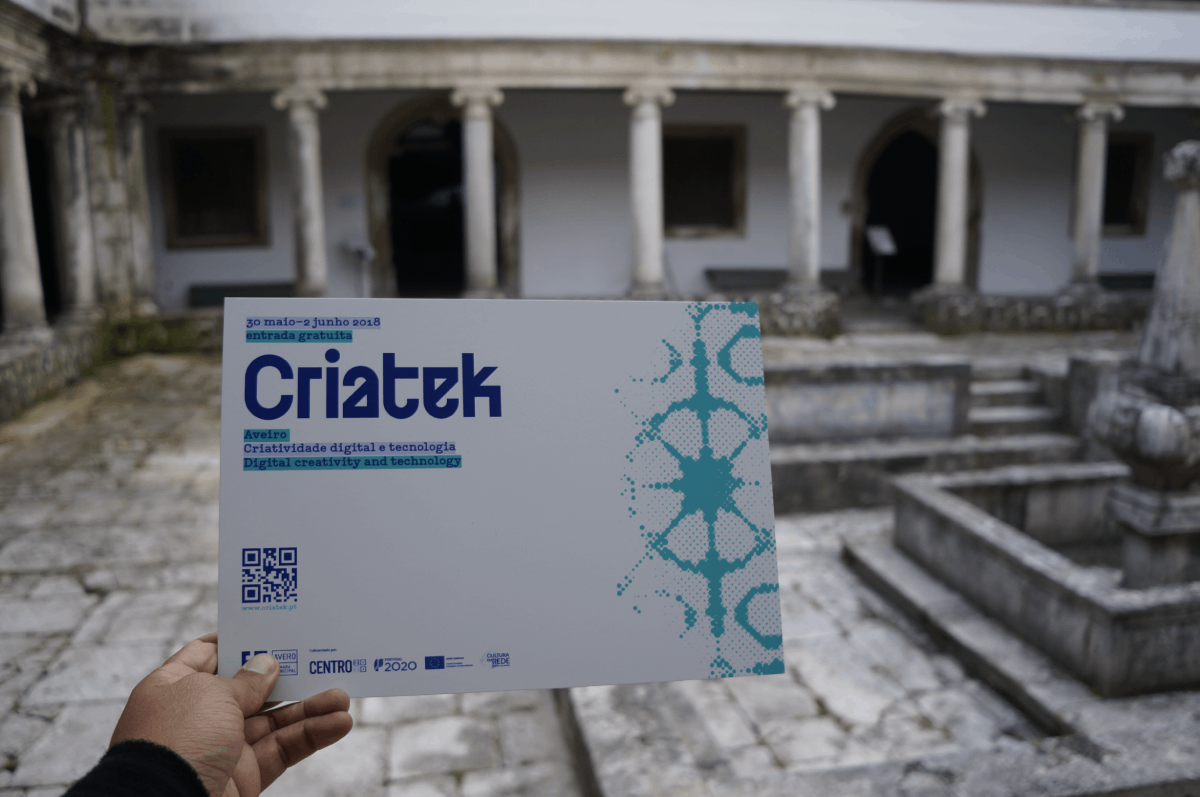 Barco was nevertheless surprised by the rich selection of national and international artists and projects which presented their works at the festival, and he believes that the occupation of Aveiro’s public spaces for audiovisual and sound art projects was something to take into deep account. In a harmonious —although sometimes almost shocking— fashion, the daily routines of Aveiro’s inhabitants and visitors were deeply transformed for the better..

People in space suits and speakers on their backs who amplified the electromagnetism of the city’s streets and devices. A noise-making cone floating around one of the city’s main canals… These examples are just two works that Sorrentino brought to Aveiro during these days. 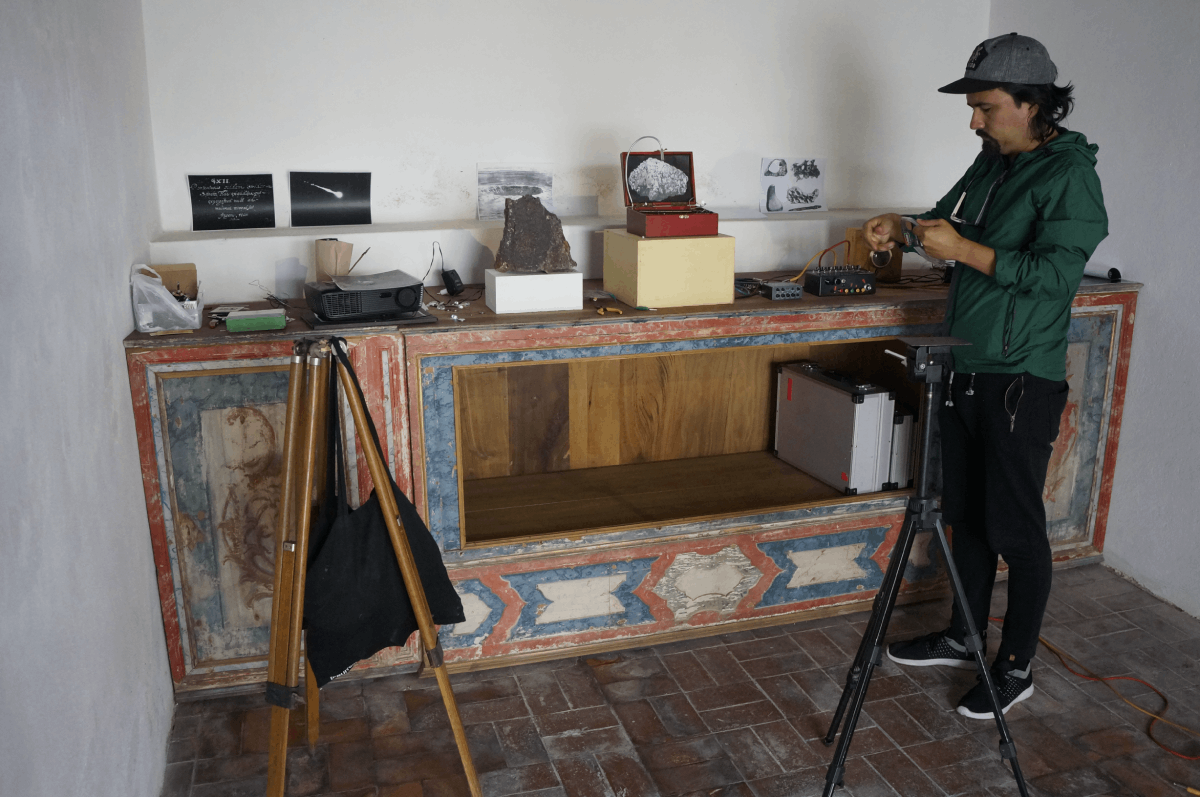 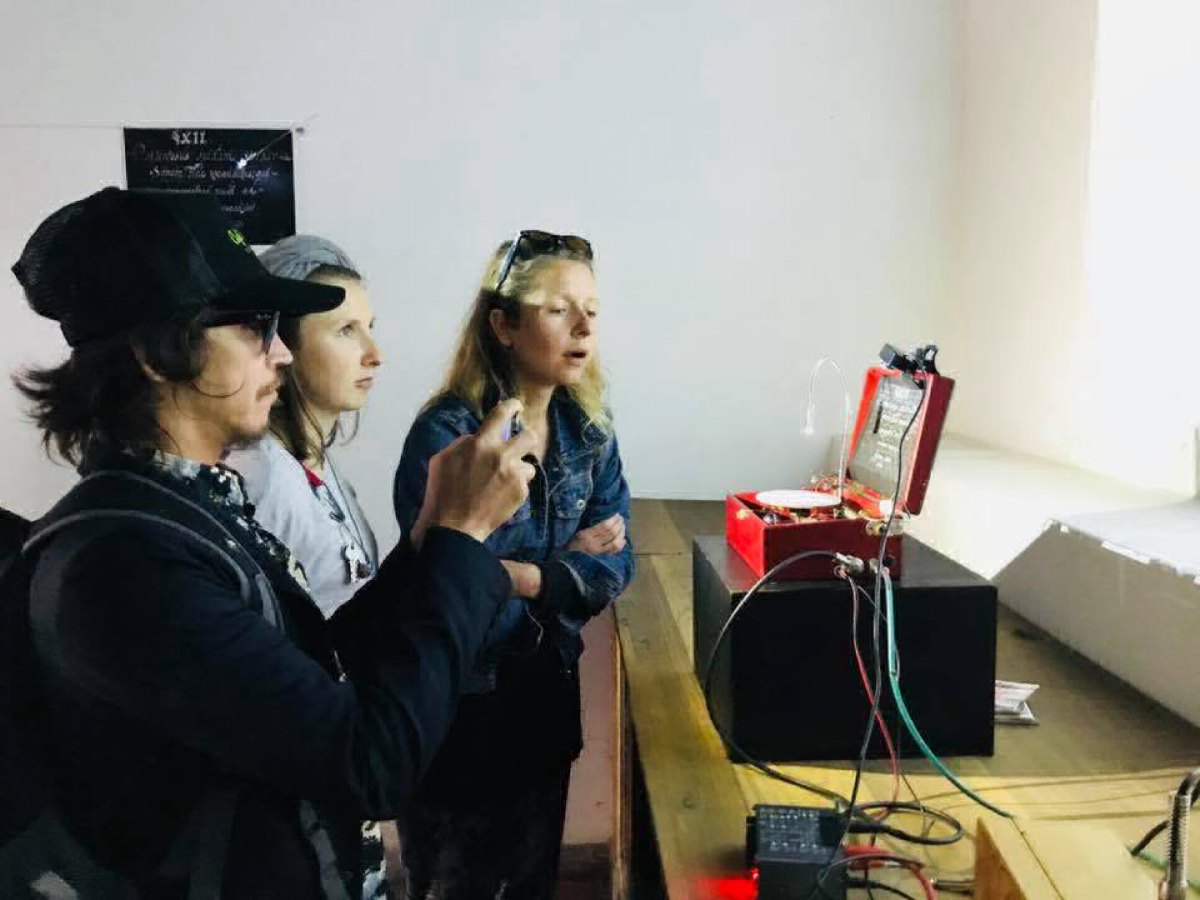 Honoured to have his work exhibited at the Museum of Aveiro, next to revered artwork collections from the Baroque period, Barco witnessed a rather stellar coincidence take place. While preparing the presentation of his installation Tiempos del Ruido, which —through a combination of machines and sound— tells the story of the asteroid that fell in Santa Fé de Bogotá in 1678, the director of the museum couldn’t help but to observe how the arrival of Santa Joana to that location (the museum was originally a convent) had coincided with the passing of the Halley comet.

The museum’s collection even includes works that illustrate that celestial phenomenon, which had by then been considered to be some sort of divine sign. After reading the original 14th century document, Barco projected a new element for his exhibition: together with Andrés Jurado, he created a minimalist installation around this interesting coincidence, using light and sound.

To exhibit in such an ancient and sacred place brought new mystique and power to Tiempos del Ruido. The audience was clearly captivated and didn’t hesitate to pose numerous questions.

The exhibition ended with Jorge Barco’s sound performance at the magnificent cloisters of the former convent, which sealed his residency at VIC and completed this unexpected cycle —which combined history, contemporary art and the sacred— in an ultimately prophetical fashion. 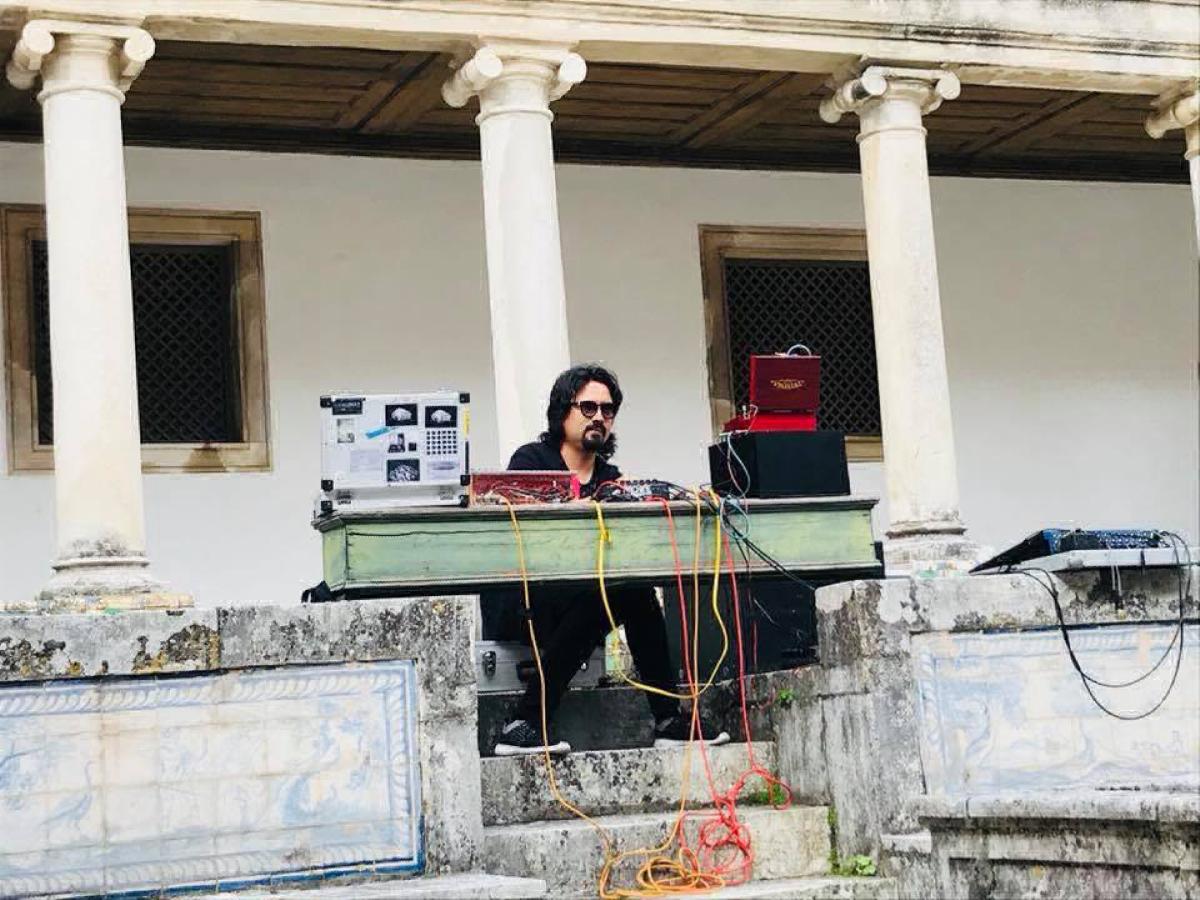 The question about the Place of Art remains alive. Spaces like VIC are absolutely crucial for creation: the conversion of artist into nomad, the transition from unfamiliar into intimate, the drifting through unknown places that ultimately boost the imagination, the unexpected encounters with other people and questions, the flowering of a network of affections: a micro-politics of caring within a global world that absorbs us, today, here in Aveiro.