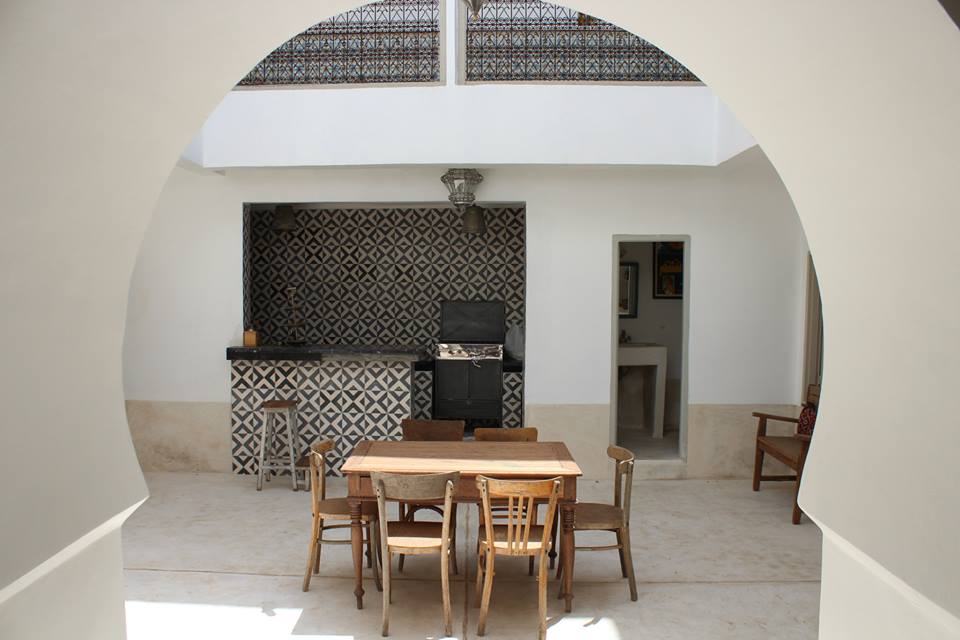 We had decided to take a two day break from the absolutely unexpected work tour that drove us from Casablanca to Beni Mellal and Rabat, during which Paulina and me collaborated in a theatre play with the Palestinian group Fragments Theatre. After a highly productive five-hour meeting aboard a bus, we arrived in Marrakech only to land directly at Le 18, a charming arts space that had been recommended to us by our dearest Moroccan contact in Casablanca, Housni.

It was only natural that I felt a sudden affinity with the place since, much like VIC, it combined ingredients of guesthouse, arts residency and cultural center, hosting periodic events and exhibitions. Located at the very heart of the Marrakchi medina, the project was developed upon a remarkable riad —a traditional Moroccan house— with a minimal and tasteful approach to interior design. 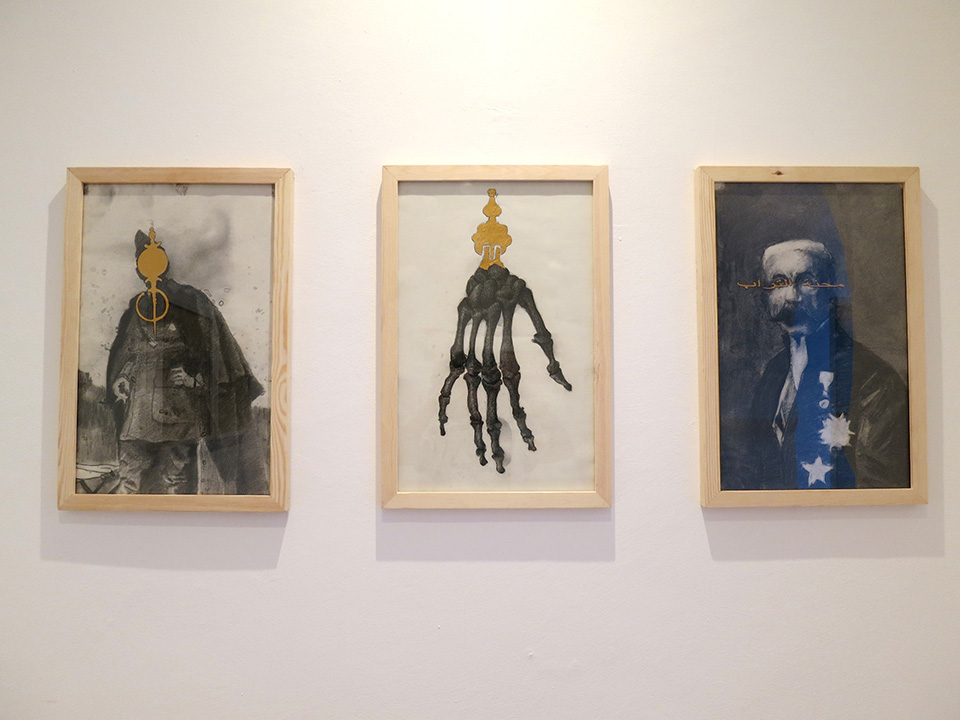 Sponsored by the group behind trendy venues such as Nomad and Le Jardim, Le 18 is run by photographer and cultural activist Laila Hida, with additional curatorship by independent researcher Francesca Masoero. We had the pleasure of talking to Meriem, a cultural blogger who is currently in charge of daily operations at Le 18, and who told us about the project’s aspiration to support emerging artists, while simultaneously aiming to connect the Marrakchi cultural landscape with the broader international arts scene.

I wanted to have a space to share, to meet people, to bring people together to think and share and bring ideas together. — Laila Hida for Happyplaces Project 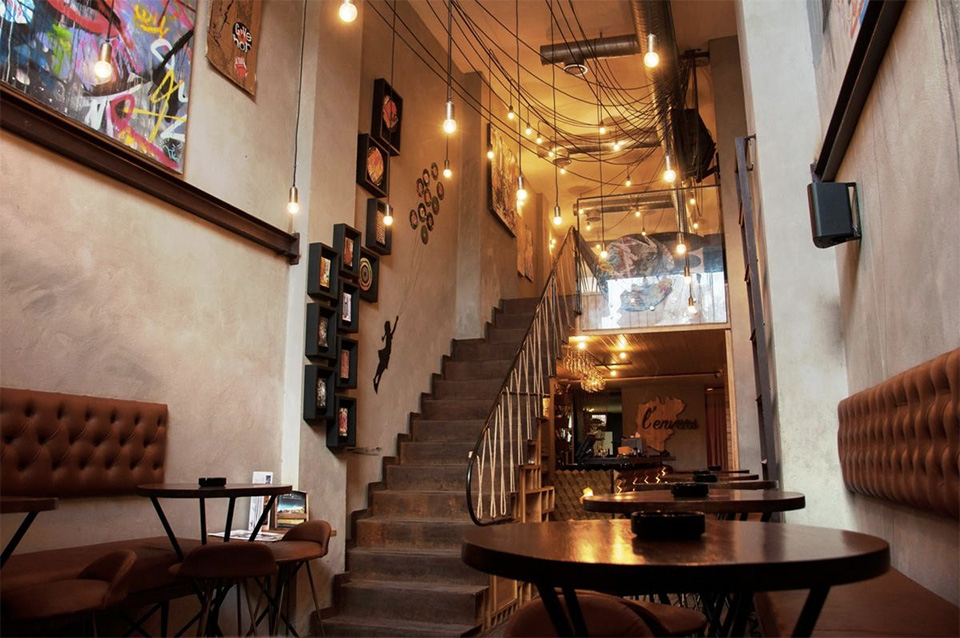 As late Mark Sandman once wrote for a Morphine song, “early to bed and early to rise makes a man or woman miss out on the night life”. So we decided to check what was on tap for that evening: it seemed that fate had planned for us to arrive in Marrakech on the exact first birthday of L’Envers, one of the few clubs in town with regular electronic evenings, hosted by skilful DJs.

Immersed in a buoyant atmosphere, we eventually ended up trashing out with Mehdi Sabir aka Two Faced, a Moroccan DJ, producer and sound designer who was in charge of the venue’s programming, and who introduced us to the some of the members of Marrakech’s leading underground DJ collectives —Rak Electronik, Plug-In Souls and Moroko Loko— all of which had their own artists performing at the celebration. I was particularly impressed by Sweethis, a Marrakech-based Belgian DJ who kept throwing unlikely breaks, jazzy techno vibes and glorious 90s anthems at us with rare dexterity and finesse. 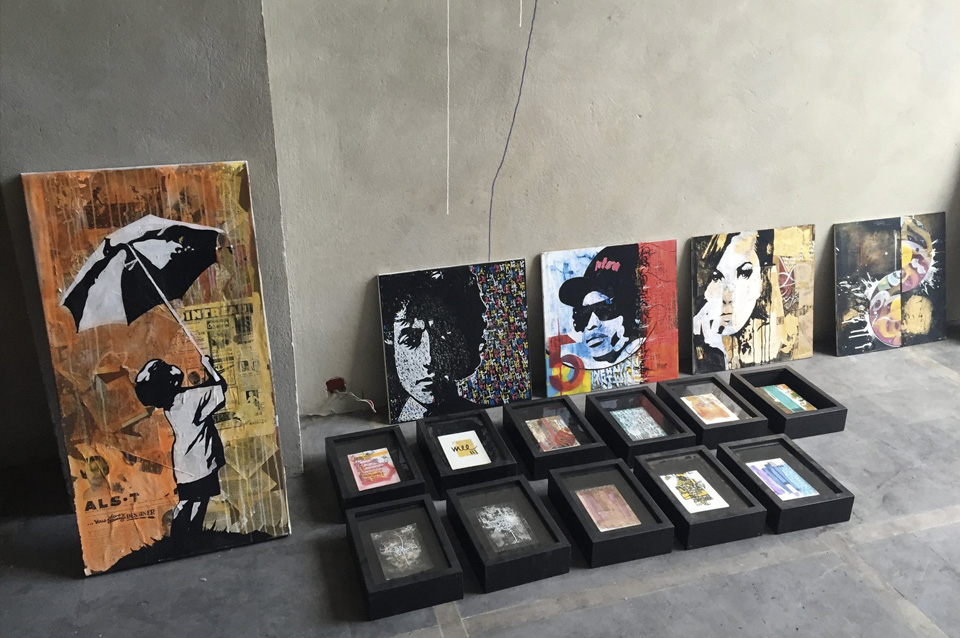 That was probably when we stumbled upon German-Moroccan performer and choreographer Hana Tefrati, one of the charismatic minds behind the Queens Collective, yet another underground arts space located within the town’s ancient medina. I had read online about their side-project Priscilla Queen of the Medina hostel and recognised Hana straight away, so I reached out to her, which ultimately resulted in a kind invitation to visit their turf during the following afternoon.

Before heading out to meet the Queens, we struggled to find our way through the convoluted streets of the souk, as we hunted for Riad Yima, home of Hassan Hajjaj, who has often been referred to as the Moroccan Andy Warhol. Influenced by the conflux of London’s underground parties and his North African heritage, the prominent artist’s works include photography, installation, performance, fashion and furniture design.

An undeniable a labour of love, Riad Yima is both a boutique gallery and a tea room, overflowing with the Hajjaj’s flashy portraits, fashion designs and recycled furniture made from African street ads. At a certain point I secretly wished I had the money to buy it all. I couldn’t help myself but asking for the price of one of the portraits —which featured a Barbie on a motorbike wearing a Gucci burkha— and finally left the place carrying an awesome postcard. 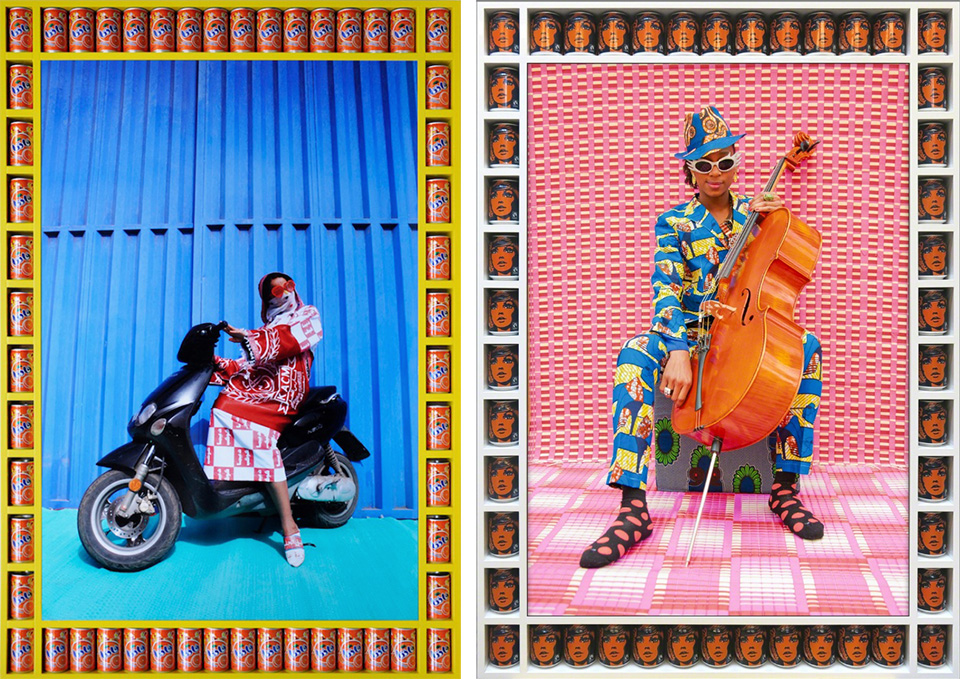 At five o’clock we were punctually knocking on the door of the Queens Collective and we couldn’t have felt more welcome. Hana took us on a quick tour through the space, and we sat down comfortably with her and some of the artists in residence, sharing concerns, experiences and dreams.

Run by artists of different backgrounds, the Queens Collective was both an intangible platform for emerging and established artists, and a physical space where its members could live, create and present their work. Slightly reminding me of our previous adventures while running the 555 arts space in Porto between 2005 and 2008, their place and its inhabitants was definitely one of its kind. 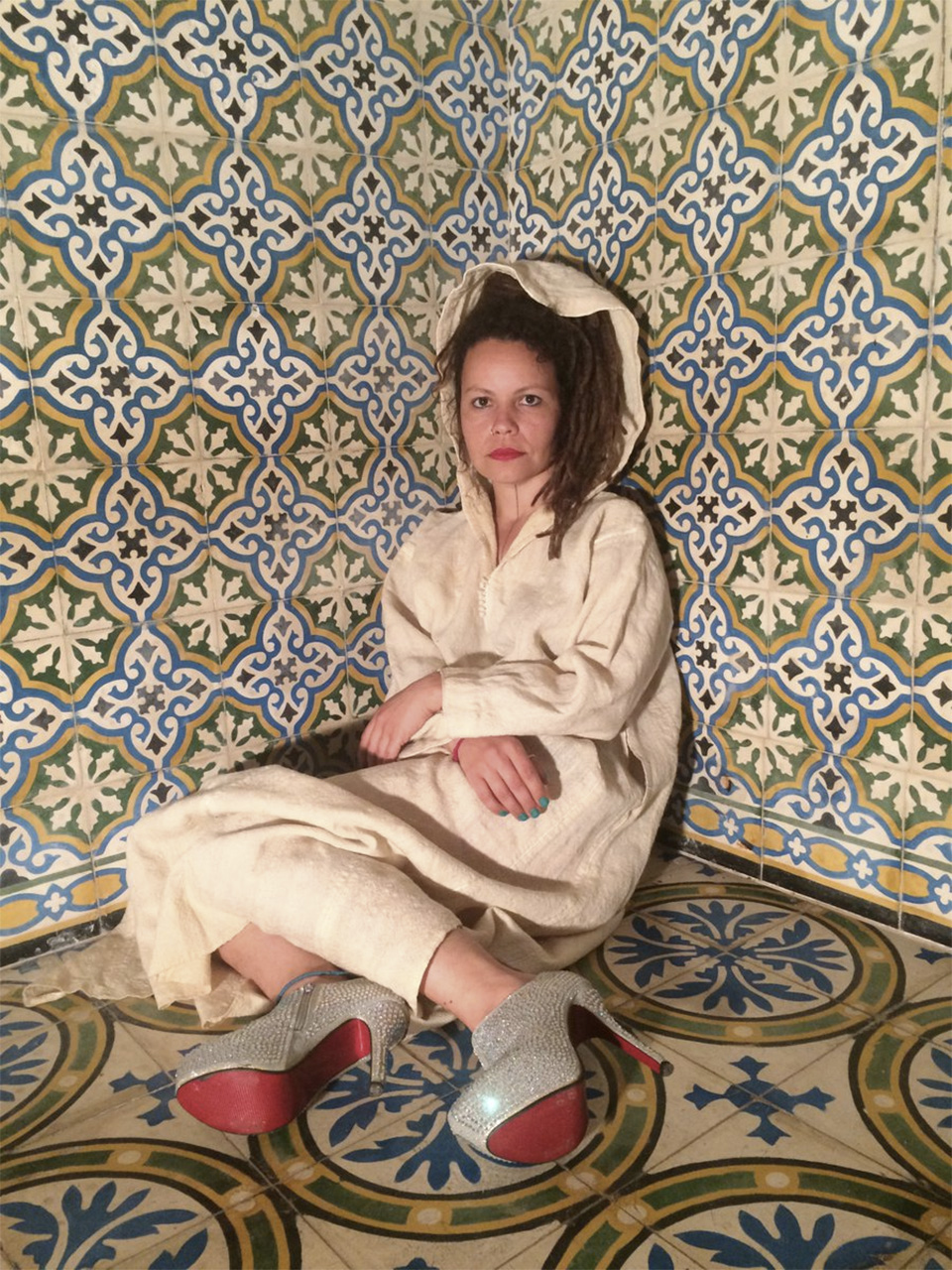 Besides hosting artists in residence, promoting partnerships with international initiatives like the Matadero (Madrid) or Quartier am Hafen (Cologne), and presenting their own events and exhibitions, the project seemed to be deeply focused on engaging local communities, hosting several creative and formative actions with groups of women and children from the surrounding neighbourhoods, aiming to generate a spontaneous dialogue between past and present, local and global.

All said and done, we were easily persuaded to stay over for dinner as we felt closer and closer to this magnetic space and to its occupants. For the first time after having shared dozens of tajine across Morocco, we were properly instructed about the politics of tajine eating, having ultimately understood how a simple meal could trace a set of metaphorical guidelines for living in community. We left the place with new friends, fresh ideas and a full heart. 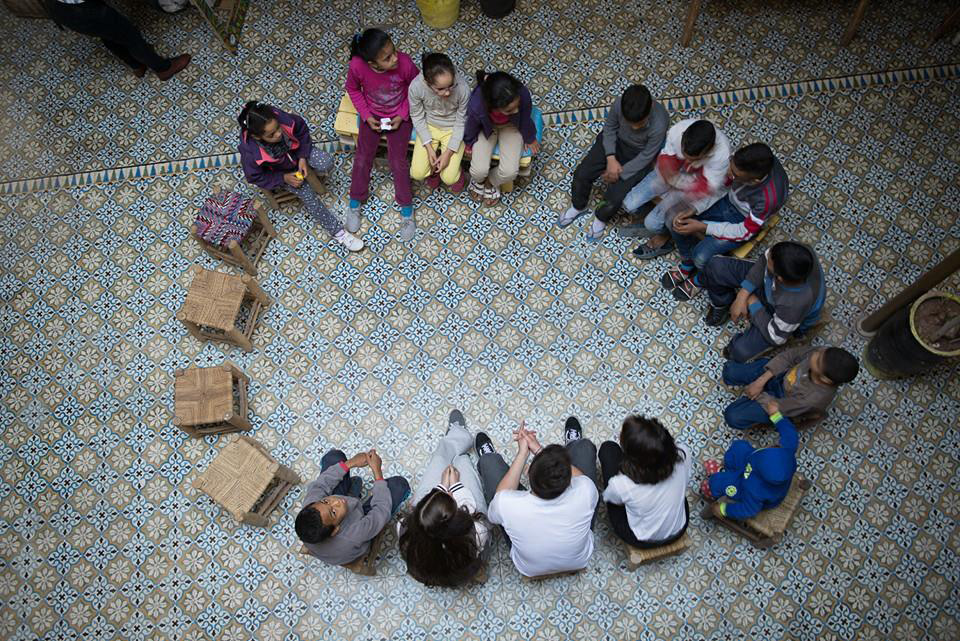 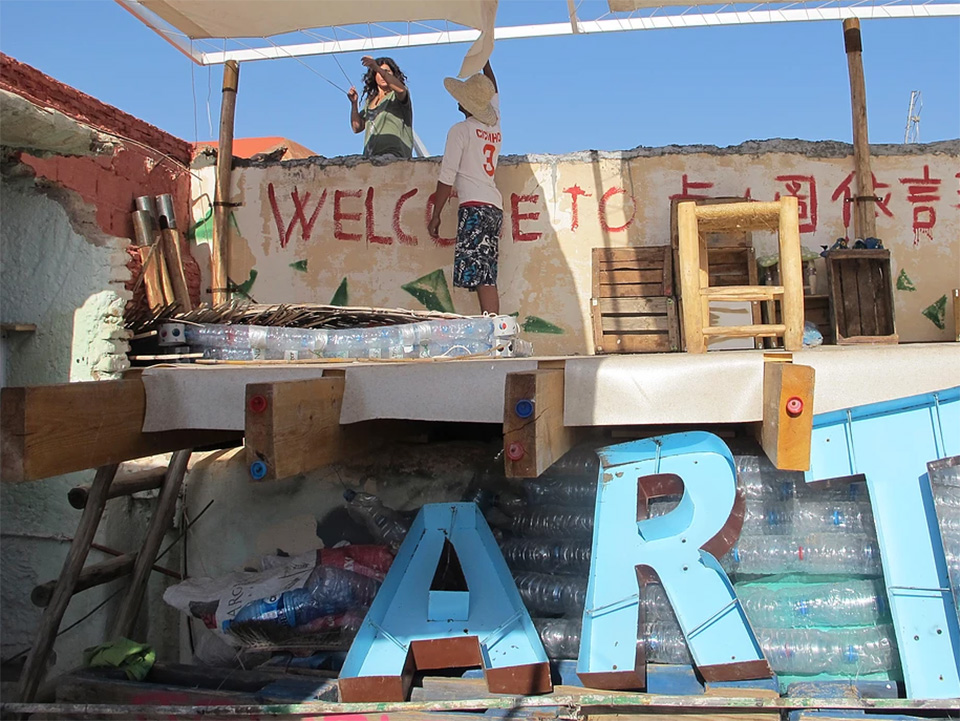 On the next morning we woke up early as we had to get on the first train to Rabat, where the Palestinian and Casablanca crews awaited us to present the last show of the “Madman” tour. Wishing to return promptly to Marrakech, we brought back with us the inspiring picture of a city where DIY art and underground culture are vastly alive and kicking. And we can only fantasise about all the astonishing places, artists and collectives we have yet to smoke out.

Not presuming to be some sort of guide to the underground culture of Marrakech, this article is just a frozen impression of our personal sequence of randomly lived experiences. If you honestly wish to get an idea of what’s going on here, you’ll have to come across your own path within the Marrakchi cultural labyrinth, just as if you were learning how to dig your own way through that massive, delicious and shared tajine pot.